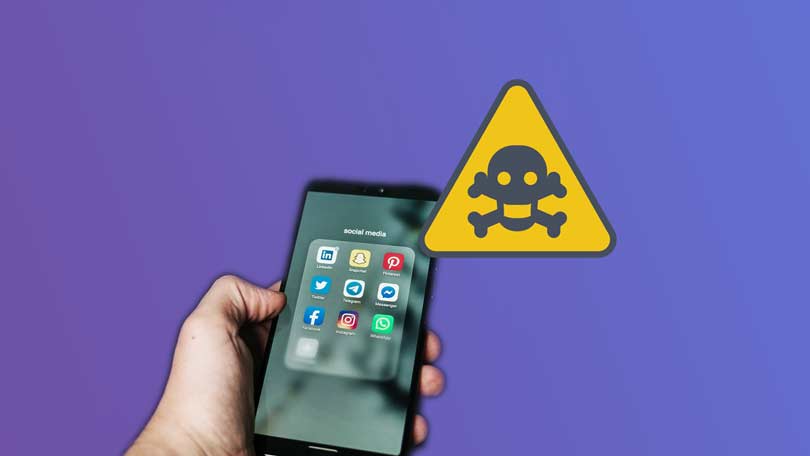 As social media platforms have expanded, youth, in particular, seem to be less happy.

This type of social media content makes users compare their lives to those of others who seem to have perfect lives, causing them to feel low self-esteem and low self-worth.

Similarly, in an interview for Harvard University, Bryn Austin explained:

“From experimental research, we know that Instagram, with its algorithmically-driven feeds of content tailored to each user’s engagement patterns, can draw vulnerable teens into a dangerous spiral of negative social comparison and hook them onto unrealistic ideals of appearance and body size and shape.”

Facebook, for instance, is a platform where fake news is shared every day. As one of the most popular social media sites, TikTok has become a place where teens adopt dangerous trends.

Social media and technology are unlikely to disappear from our lives anytime soon. They will probably develop further in the years to come.

That’s why it is beneficial to understand why and how social media platforms can be toxic and how to detox ourselves from their effects.

Thanks to social networks, keeping in touch and communicating has never been easier. However, social media platforms are more than just communication tools. Many of us share a good deal of our lives online, which can negatively affect our relationships.

A good portion of the content posted on social media, especially photos, tends to be “filtered” or present a completely different picture from real-life events. Couples often share only happy moments with their partners, which gives the impression that everything is perfect. Consequently, many love relationships can suffer from unrealistic expectations, and people can become feeling sad or frustrated for not being able to leave the life portraited on social media.

Furthermore, liking and commenting on photos may trigger a jealous fit. In the case of a partner who has the trait of jealousy, controlling their partner daily by watching what they do on social media may create a toxic environment for the relationship.

Spending time on social media platforms may drive you away from your partner. Today, instead of talking in person and nurturing a genuine connection, many people look at their phones instead of paying attention to the person who sits next to them.

These behaviors can create feelings of neglect and closeness between couples.

Even though the name suggests it, social media can be quite a lonely place for a couple of reasons.

When you are glued to your smartphone screen instead of interacting with your real-life friends, family members, or even new people, you may feel distant and lonely, leading to social isolation.

It may also seem as if everyone else on Instagram, Snapchat, and Facebook is having a great time, but not you.

In addition, many studies have researched the connection between loneliness and social media platforms. According to the study titled “Smartphone use undercuts enjoyment of face-to-face social interactions,” the more time we spend scrolling our smartphones, the less time we spend on family and friends’ activities.

The University of Pennsylvania also conducted a study named “No More FOMO: Limiting Social Media Decreases Loneliness and Depression.” The research shows that limiting social media use to 30 minutes per day led to significant reductions in loneliness and depression. Participants in the study reported feeling less fear of missing out when they limited their time spent on Facebook, Instagram, and Snapchat and felt happier and less anxious.

People can form social connections and stay connected even when they are on the go through social media.

However, allowing these platforms to take over every aspect of our lives can be harmful and lead to mental health issues such as depression and anxiety.

The challenges of social media date back to around 2013. From the ice bucket challenge to selfies without makeup, these challenges aimed to raise awareness of various issues affecting people worldwide. On the other hand, social media can also be a place where harmful content is often shared.

While there are many well-meant challenges, the “cinnamon challenge” and the “coronavirus challenge” seem to draw more attention, particularly among younger users. Some of these challenges can be dangerous and sadly, users have ended up tragically while attempting them.

What makes teenagers attempt these challenges?

Feeling connected and a part of something greater might be one of the reasons. Going viral can be another. If the challenge is outrageous enough, it can raise more reactions and engagement, thus increasing the chances of the average user going viral.

The positive side is that one of the most popular social media platforms- TikTok decided to undertake safety measures regarding the “milk crate challenge” and banned the challenge by removing videos from users who attempt this challenge.

As a result of social media platforms, many people have gained a following and subsequently built careers as influencers.

Influencers are responsible for promoting various products and services to their followers. This way, many businesses have a chance to reach a wide range of relevant audiences. As a consequence, influencer marketing has grown in popularity in recent years.

But the real concern is whether or not users can trust influencers who are paid to advertise products.

There are cases when influencers self-edit their photos with apps like Face Tune or PhotoShop. Then they promote beauty or slimming products, claiming that the products are responsible for their looks despite having never tried the product themselves.

People who believe in their idols may be harmed by this way of selling products that promise results that are most likely false.

According to the APA, Dictionary of Psychology, instant gratification is the experience of satisfaction or receipt of reward as soon as a response is made.

You may ask what is wrong with receiving a reward immediately after doing something?

Well, when it comes to social media, likes, comments and new posts on your social feed give your brain a short-term, fast pleasure that makes you feel great. This way, you train your brain to receive instant gratification all the time.

As a result, users may become addicted to social media platforms and scroll endlessly, looking for that instant reward.

Social media platforms allow users to express their opinions, some of which may prove harmful and dangerous.

Despite social networks’ strict rules against spreading hateful content, some users still manage to write and layout harmful content. People who are exposed to these opinions may feel threatened, sad, and unwelcome.

Unfortunately, not all users are aware of these data breaches and what does means for their personal information to be exposed.

Namely, when using social media, users leave personal data such as name, surname, day of birth. This data can be downloaded from third parties, which can be used for constant ad targeting later on.

An additional risky cyberattack that is quite common is the phishing attack, in which cyber attackers deceive social media users and steal their bank accounts.

The spread of various malware is another way users are put at risk. The malware allows attackers to gain access to users’ computers and retrieve sensitive data from them.

How to protect yourself from social media toxicity?

The most obvious answer is to reduce the time spent on social media.

However, a lot of modern professions rely on social media, but also professions transforming digital technology.

Although it may seem complicated, there are many activities that can be done instead of scrolling through social media.

In addition to reducing the time spent on social media, users can learn more about this topic by reading or watching various videos.

Another alternative would be to report harmful content through the report option available to almost all digital platforms.

The benefits of social media, including the easy connection of people, are undeniable.

But with the excessive use of social media platforms and some of their characteristics can be harmful to the mental health of users of all generations.

Leaving them is probably impossible because, for many, they are the primary means of earning. But reducing the time spent on social media can contribute to increased happiness and satisfaction.

Why is social media so toxic?

In addition to the influence on relationships, its close connection with loneliness, the spread of harmful trends, trust issues with influencers, getting addicted to social media, and getting exposed to dangerous opinions, there are many other reasons why social media can be toxic.

Will this trend continue?

It is impossible to know if this intensive use of social media will continue in the future. Overall, however, we can conclude that the number of social media users is rising.

Users must be aware of all the negative effects of social media and know when and how to use it to their advantage.

How can you protect yourself from its toxic effects?

It is important for social media users to limit the amount of time they spend on the platform and learn why digital platforms can be toxic.

33 Cheap Things to Do Instead of Social Media

Why Do People Fake Happiness on Social Media